Hugs, autographs, questions and excitement were rife on Thursday afternoon when Cassie came to visit. 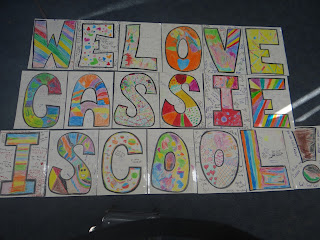 Rescheduled: We have rescheduled our ski day, due to a clash with Year 8 testing at Cashmere High.

Good luck to our team of cross country runners who are off to compete at the Canterbury Cross Country on Wednesday this week, June 19.

Mini-Movies: the media team are currently taking movie footage to create mini-movies that will promote Year 7 & 8 at Beckenham. Over a series of three Mondays, starting next week, these students will work with Carole Kendall from N.E.T to learn how to edit and produce their movie. These will be full day sessions, run here at school.

Sport Highlight: On Friday the Breakers basketball team played Sacred Heart, who are top of the table. We knew this would be a tough game and thought the score would be very high to them and rather low to us. Boy, did the Beckenham Breakers play a stunning game! Two minutes from the final hooter the sore was 6:6, then Sacred Heart scored 1 from a free throw. Nothing was scored in the final minute, then Jimmy put up a shot as the hooter went off; the Beckenham crowd and players went wild!! Unfortunately he was a split second too late and the basket wasn't counted. So Sacred Heart continued their winning form, but boy did the Beckenham Breakers give them a fright. Awesome playing Jimmy, Jack R, Jack T, Sabine, Ryan, Oscar, Sam B and James, can't wait for the next game.
Posted by nickydunlop at 09:39